With the ongoing pandemic making it impossible to hold in-person phonebanks or circulate traditional paper petitions, CWAers are using new models of communication to make our voices heard and continuing to advocate for vital pieces of legislation to protect workers.

Each night at 7pm New York City comes together to cheer for the essential workers who are caring for the sick, stocking grocery shelves, producing and delivering food and supplies, and cleaning our streets, subways, and buildings. But we must go beyond cheering to make sure these workers have the pay, sick leave, dignity, and workplace protections they so deeply need and deserve as they risk their health to keep our communities functioning.

The New York City Council is considering precedent-setting legislation that would protect the essential workers who are risking their health during this crisis. Paid sick leave, protections against unfair firings, and extra pay for dangerous work are common in many union contracts and the norm in many other countries. It's time for us to ensure that all workers are afforded the same rights.​

Sign the petition here to tell the New York City Council to pass the Essential Workers Bill of Rights to get workers the protections they need!​ 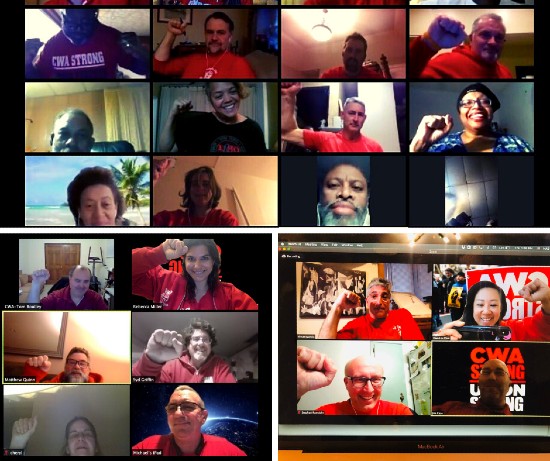 CWA members from locals throughout New York and Connecticut came together for our first ever Remote Phonebank last week to fight for the PAID Leave Act (S.3513/H.R.6442), which will provide the paid sick days and paid leave that working people need now and in the future. While many union members throughout the country have contracts that provide paid leave, the U.S. is currently the only industrialized country that does not have a real paid leave program covering all workers, and many are forced to choose between their job and their health. And with the COVID-19 pandemic still spreading rapidly throughout the country, now more than ever, we must do better to protect all workers. Having to decide between a paycheck and health is dangerous not just for workers, but for their families, coworkers, and communities.

We spoke with more than 250 CWA members on Thursday, April 30th, calling on them to urge members of Congress to support the PAID Leave Act and stand with workers.

Without swift and aggressive action from Congress, public services in the United States will be decimated and hundreds of thousands of public employees, including nurses, unemployment workers, counselors, and others will lose their jobs. In New York, the jobs of nearly 20,000 city and state workers represented by CWA are on the line. New Jersey State, county, and municipal workplaces have already been down more than 20% of staff since 2008. We can’t lose more workers.

We’ve sent over 2000 emails and made hundreds of phone calls to U.S. Representatives and Senators about the State and Municipal Aid for Recovery and Transition (SMART) Fund, a bill that would create a $500 billion fund for state and local governments, sponsored by Senator Menendez (D-NJ) and Senator Cassidy (R-LA).

Click here to send an email telling your Members of Congress that we must protect Public Services!