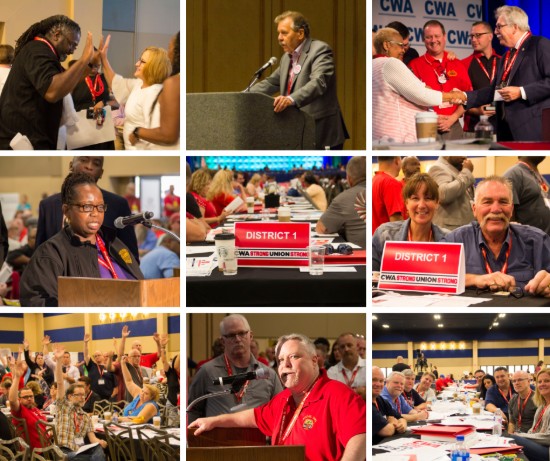 At the 2019 CWA Convention, delegates unanimously re-elected CWA President Christopher Shelton and Secretary-Treasurer Sara Steffens. Elections were also held for each sector and district Vice President position, along at-large diversity members of the Executive Board.

Our own District 1 Vice President Dennis Trainor ran unopposed for re-election, and was elected with thunderous applause from the District 1 delegates. 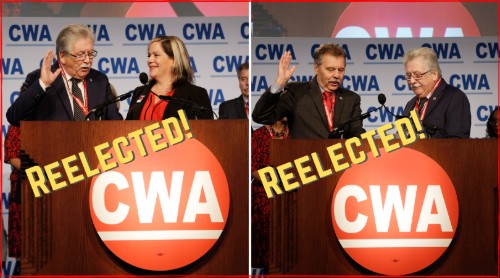 “I’m honored to be elected to serve another term as Vice President of District 1!” Dennis said. “I couldn’t be more proud to continue working with the greatest members of the greatest union in the world.”

Delegates representing CWA locals throughout the country braved the soaring summer temperatures to gather in Las Vegas, NV July 29 - 31 and get down to business on a number of topics to strengthen the union through the coming years.

Seven resolutions were proposed, voted on, and passed by the Delegate body, including launching a “CWA Stewards Strong” campaign to redefine the role of the steward with a focus on building worker power; supporting tax policies that require corporations and the wealthy to pay their fair share instead of balancing budgets on the backs of working people; and rebalancing income allocations to effectively build our union for the future.

One resolution sought to condemn the divisive, racist "send them back, love it or leave it" rhetoric of the President of the United States and to call on other unions, community organizations, legislative bodies, and individuals to issue similar calls for the President to end this rhetoric, on his own part and among his supporters. During the debate, CWA Delegates made a powerful statement, circling the room to stand in support of the resolution and to denounce racism. 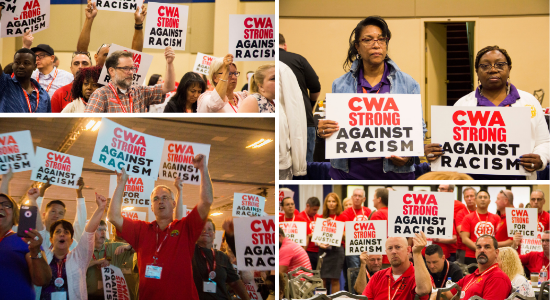 Since the last CWA Convention, locals from around the country have brought in over 4,500 new members through external organizing campaigns, and they were honored for their extraordinary work at the Convention. 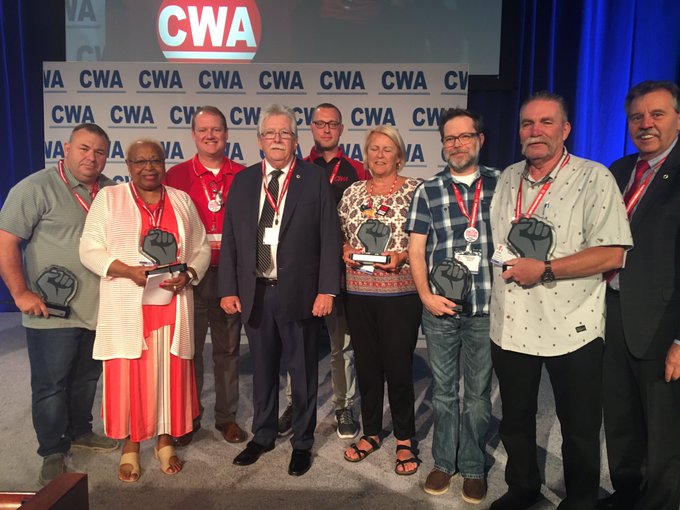 The Presidents of New Jersey Locals 1031, 1032, 1033, 1036, 1037, 1038, and 1040, representing NJ State workers, proudly accepted the first Morton Bahr CWA STRONG Award from President Chris Shelton in honor of the former CWA President's vision, tenacity, and union building. The NJ locals were recognized for their tireless work fighting back against anti-union attacks and signing up thousands of new members over the past year. As he presented the award, Shelton noted how Morty always embraced mobilization and political action to secure the best for our members. 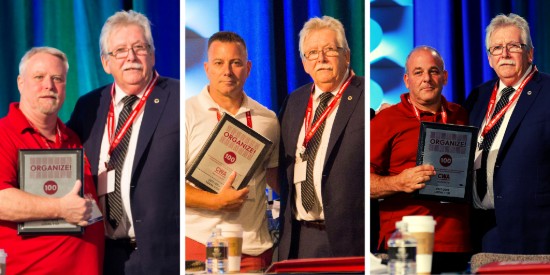 Locals 1101, 1103, and 1109 were among several locals across the country recognized for welcoming over 100 new members each over the past two years. 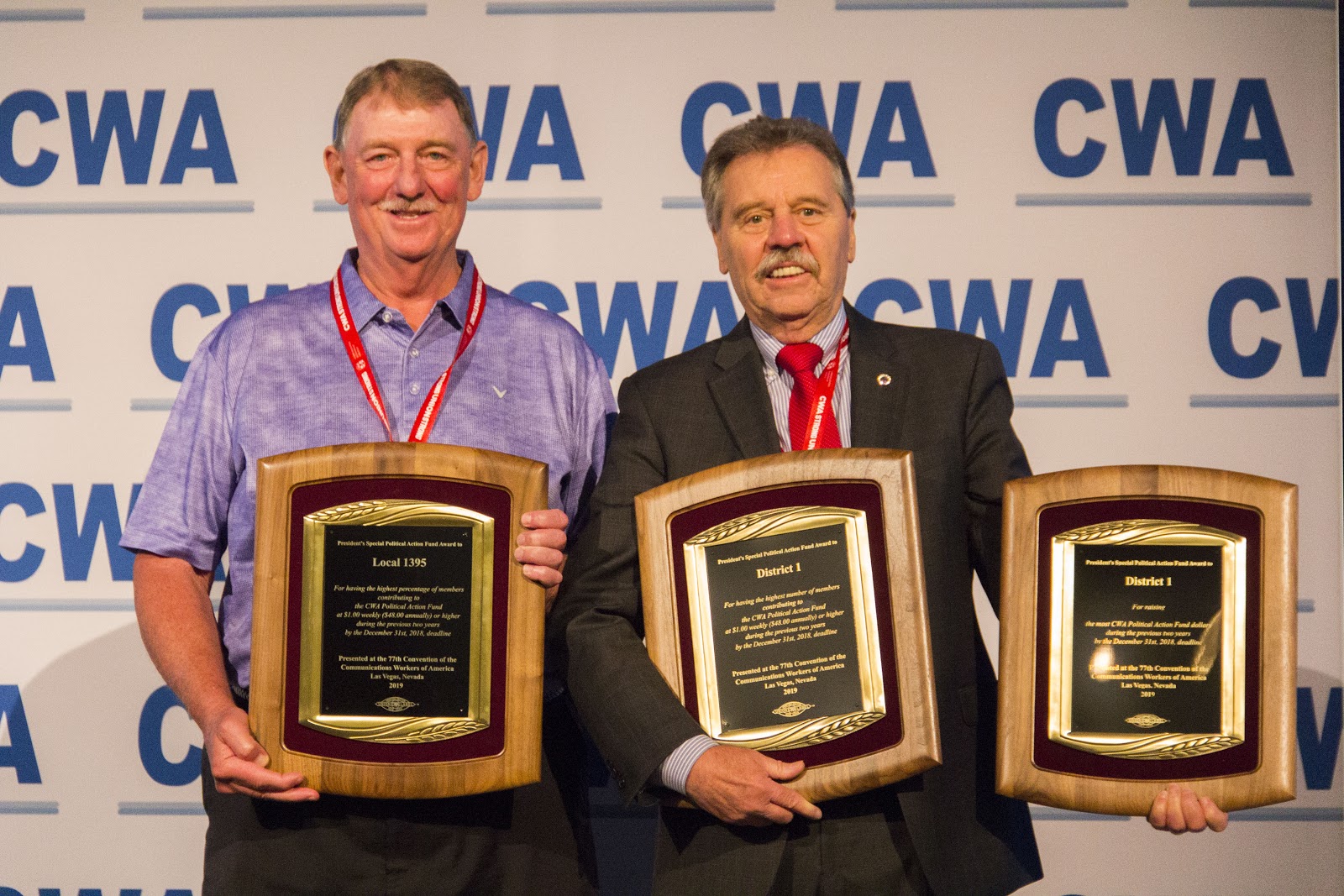 D1 had the most CWA Political Action Fund contributions to help fight for workers on the legislative level, while Local 1395 had the highest percentage of members contributing to the PAF with at least $1 per week. 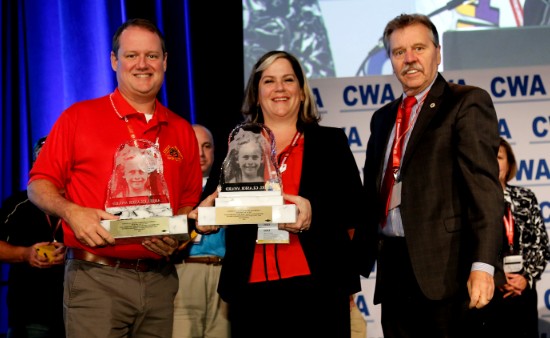 And CWA Local 1037 got two awards for their contributions over the last two years towards the Elizabeth Glaser Pediatric AIDS Foundation to help children and mothers with HIV and AIDS around the world.

Congratulations to all the winners!

Check out more pictures from the CWA National Convention here.