31,000 Stop & Shop workers faced off with a multi-billion dollar company last month and came away with a victory, proving once again how much power there is when working people stand together in a union.

The grocery store chain workers, represented by UFCW Local 1445, walked off the job across New England on April 11th in one of the largest private sector strikes in the U.S. since CWA’s 2016 Verizon strike. The strike came in response to Stop & Shop’s attempts to cut employee pensions, raise the cost of healthcare, and roll back overtime pay, and amidst rising concerns about the threat of automation to workers’ jobs.

The Stop & Shop workers received a huge amount of support from the community, elected leaders, and other unions, including CWA. Locals 1298 and 1400 walked the picket lines with striking workers, demanding a fair contract from the multi-billion dollar company that gained millions of dollars thanks to the recent GOP tax cuts.

After ten days of striking, during which the community demonstrated an outpouring of solidarity and support and the company lost an estimated 75% of its customer volume in one weekend, on May 1st - May Day - the new contract was ratified by a near-unanimous vote.

READ MORE about the strike here. 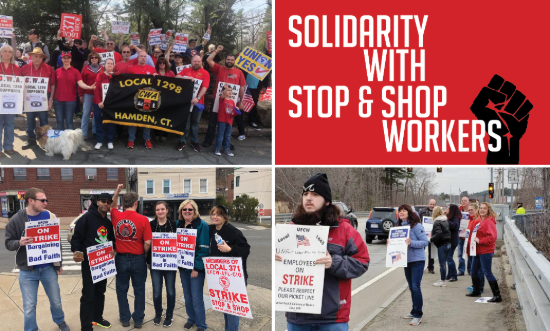