Throughout the world, May 1st has historically been a day of protest and celebration of the people that work to make our communities strong. CWA members throughout District 1 used this year’s May Day to celebrate workers as well as to lift ourselves and our fellow workers up.

CWA Local 1298 members used May Day to fight for workers across Connecticut, joining a rally on the steps of the Capitol Building along with other unions and community groups demanding a $15-per-hour minimum wage for all workers. They were joined by legislative allies and friends to CWA including State Senator Julie Kushner, a former UAW Area Director who Local 1298 helped elect back in November; and State House Rep. Robyn Porter, a longtime advocate for workers.

After the rally, CWAers made rounds through the Capitol Building to speak with legislators about the issue and the need for strong minimum wage laws for the good of the whole community.

CWA Local 1101 members and retirees marked the holiday along with hundreds of other union members with a massive New York City rally.  They marched to demand rights for all workers and call for solidarity across all industries. 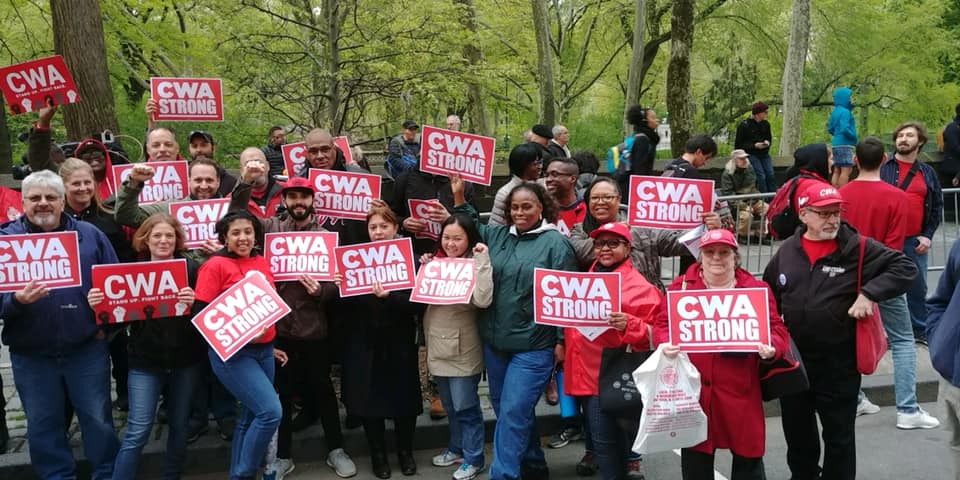 Local 1101 at May Day rally in New York City

Since being informed that fees that they pay to the university would soon be increasing, graduate workers at SUNY campuses have been organizing and fighting back.

On May Day, SUNY Stony Brook workers organized a huge - and we mean huge - rally on campus, filling the halls of the campus library  to demand an end to fees that keep them at poverty wages.

“When that fee bill comes through, it ruins my whole month,” said Steven Ketchum, a research assistant at SUNY Stony Brook. “[Research Assistants] do the lion share of the research here, and the [Teaching Assistants] do 60% of the teaching here. We’re essential employees, but we have to pay for things like the tech fees, which I need to do my job. President Stanley and his administration people aren’t paying for the internet. We’re the only full-time employees that pay to keep the lights on around here.”

The workers were joined by fellow 1104 members as well as university faculty, and marched to the university president’s office to present a petition signed by over 1,500 people, and  a promise to continue fighting until victory.

READ MORE about the protest here. 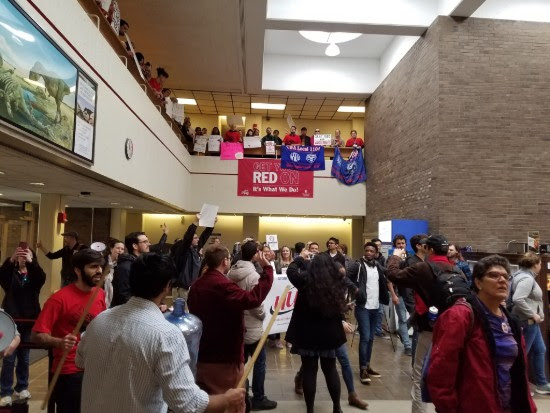