Members of CWA Local 1102 joined a coalition of labor, community, and legislative advocates on April 2nd to demand justice for Justin Rashad Long, an Amazon warehouse worker who was fired in February after speaking out about harsh working conditions and attempting to organize a union at the warehouse.

According to the New York Times, “before he was fired, Mr. Long asserted at public meetings and in comments to the news media that Amazon required him and other workers to work 12-hour shifts five or even six times a week with few breaks during the peak holiday season, and that warehouse managers had unreasonable production targets.”

Local 1102 joined the Retail, Wholesale and Department Store Union, the New York State Nurses Association, Make the Road NY, and others to deliver a letter signed by dozens of labor and community groups and New York legislators to Amazon representatives at the warehouse, stating in part:

As Staten Island residents, faith leaders, community organizations, labor unions and elected officials we are deeply concerned by Rashad’s firing and by Amazon’s apparent disrespect for its workers. [...] We will continue to stand in solidarity with Amazon workers fighting to improve their workplace here in Staten Island and at Amazon facilities across the city. 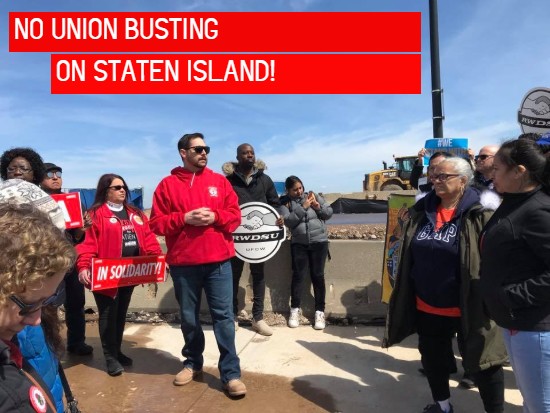