CWA Local 1180 members and retirees flooded the steps of City Hall in New York City with red on April 2nd to celebrate the finalization of a massive and hard-fought victory in their Equal Employment Opportunity case. In honor of Equal Pay Day, April 2nd, Local 1180 was joined by dozens of other community leaders and legislators to celebrate the EEO victory and demand fair pay for all New Yorkers.

The EEO settlement is the culmination of a years-long battle on behalf of Administrative Managers represented by Local 1180, in which it was found that there had been pay discrepancies for women and people of color within that job title working for the City of New York.

“Back in 1978, when you look at the administrative manager title, when it was mostly held by white males, the job was paying the equivalent of $92,000 a year,” said Arthur Cheliotes, former 1180 President.  “Yet when we filed the complaint, our members were getting just $53,000 as a starting salary.”

The case was first filed by Local 1180 back in 2013 when the union found that, after adjusting for variables such as time in title and time working for the City, female Administrative Managers of color were making almost $16,000 less than their white male counterparts, or about $.69 to the dollar. In 2015 the Equal Employment Opportunity Commission ruled in favor of 1180, finding reasonable cause to believe that the City of New York had engaged in discriminatory pay practices. The EECO estimated the disparity cost the workers nearly $250 million over the course of a decade.

Following more than two years of negotiations with the City over a settlement, 1180 has finally signed a stipulation of settlement agreement on the terms. Under the terms of the $15 million deal, 1,600 CWA members and retirees will be entitled to back pay and pay increases.

“We have been here far too many times,” said Local 1180 President Gloria Middleton, speaking at the Equal Pay Day rally.  “But today is a day of celebration for 1180. This settlement corrects a 40-year historical wage disparity based on gender and race - a wage gap for women and minorities that is all too real and all too common.”

WATCH video of the rally here. 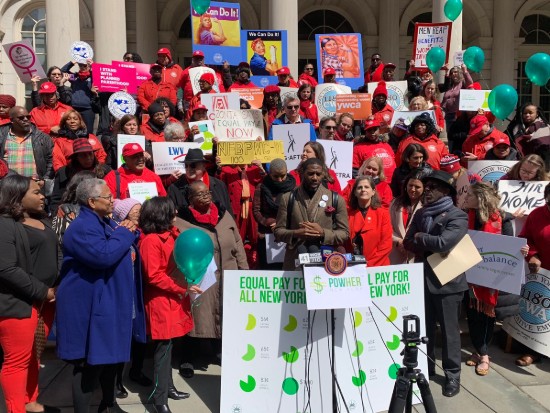 Following the victory, 1180 members Rose Reeves and Gayl Johnson were interviewed by Actress Jessica Chastain as part of the "Noisemakers" podcast about their personal stories of pay and gender discrimination and fighting for equality at work. The whole podcast is worth a listen, but you can jump to 14:19 to hear Gayl and Rose. Check it out here!