Having passed the NY Call Center Jobs Act in the NY State Senate on March 12th, we've turned our attention to the Assembly with three Weeks of Action to pressure them to pass the bill, which they did by overwhelming majority votes in 2017 and 2018.

After years of advocating for legislation to protect call center workers in New York we’re closer than ever to victory, but we need to make a serious push to get it done.

Two weeks ago, hundreds of CWA members across New York sent emails to their Assemblymembers demanding support for the bill. This week we’re writing postcards and making phonecalls to make our voice heard loud and clear: New York needs the NY Call Center Jobs Act now. In just a few weeks we’re losing 150 of our brothers and sisters in Syracuse as AT&T closes a call center there and sends those positions to Florida. We need to act before we lose any more.

I am a constituent and a union member. I'm calling to urge Assemblymember ________________ to tell Speaker Heastie that they are a strong supporter of A567, the New York Call Center Jobs Act, and to urge the Speaker to bring the bill to the floor immediately for a vote. The Assembly needs to act NOW to protect call center jobs in New York and to make sure that companies that send call center jobs overseas don't get the benefit of New York tax dollars.

Not sure who your Assemblymember is? You can use your address to look them up here. 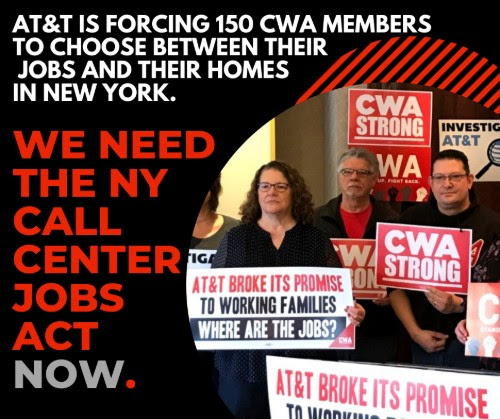