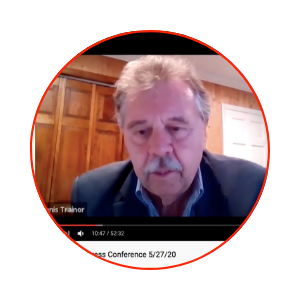 CWA District 1 joined a coalition of ten unions representing well over 1.5 million workers in New York on May 27th to call on Albany to increase revenue through higher taxes on the ultra-rich in order to address the state’s dire fiscal crisis instead of resorting to budget cuts that will hit New York's workers and low-income communities the hardest.

“Times like these require shared sacrifice," said CWA District 1 Vice President Dennis Trainor. "Which is why New York State must ask the wealthiest among us to contribute their fair share of resources to soften the impact of COVID-19 on our 19.5 million residents."

We called for increased taxes on those earning $1 million a year and above, a pied-à-terre tax on secondary residences in New York City, and a new capital gains tax on the more than 100 billionaires who live in New York State. Together, these measures could generate upward of $5-7 billion a year in revenue, which will be desperately needed to help address the consequences of the COVID-19 pandemic and prevent devastating cuts to needed public resources.

The coalition reminded Albany that “New York State has always been a beacon of fairness to the rest of the country. As Governor of New York during the early years of the Great Depression, Franklin Delano Roosevelt experimented with many of the social programs which would later evolve into the New Deal. During the current crisis, New York’s leadership has confronted the pandemic with an approach rooted in science, honesty, and compassion. As we deal with the economic crisis engendered by the pandemic, our progressive values must come to the fore. We are all in this together, and sacrifice must be shared.”