UNIONS GEARING UP TO MAKE SURE THE CENSUS COUNTS

2020 is shaping up to be a massive year politically, and one of the most important events is coming up in just two months: the U.S. Census.

The Census has a huge impact on the day-to-day lives of every person in the country. From legislative representation to funding for public schools and hospitals to sidewalk upkeep, the Census affects every part of our lives. In New York City alone, the 2010 Census undercounted residents by an estimated 35% - that’s 35% of funding for our communities that we missed out on.

It is therefore enormously important for every single person to fill out the Census questionnaire and be counted, to ensure that our communities are accurately funded and accurately represented.

For the first time ever, you can take the Census online as well as in person or by hardcopy survey, starting on March 12th. Over the coming months unions and community leaders will be going all out to ensure that every single member of our communities is counted. 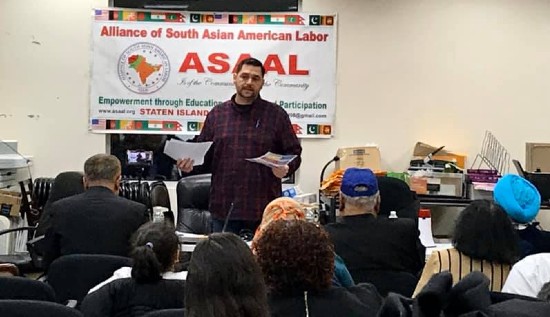 Steve Lawton, CWA Local 1102 President and Sustainable Staten Island Coalition Leader, spoke at an Alliance of South Asian America Labor Census Event about how important it is for labor unions to help with the Census count in Staten Island