At this time last year, CWA members were staring down a tough campaign to push a bill through the New York State Legislature to protect call center jobs.  The 2018 Legislative Session ultimately ended in disappointment as the NY Assembly voted overwhelmingly in favor of passing the bill, while the Republican State Senate leadership refused to even bring the bill to the Senate floor for a vote.

Fast forward one year later, through months of campaigning to help pro-worker Democrats take over the State Senate and months more of lobbying, calling and writing postcards to legislators, rallying and holding press conferences, and the outlook is very different. 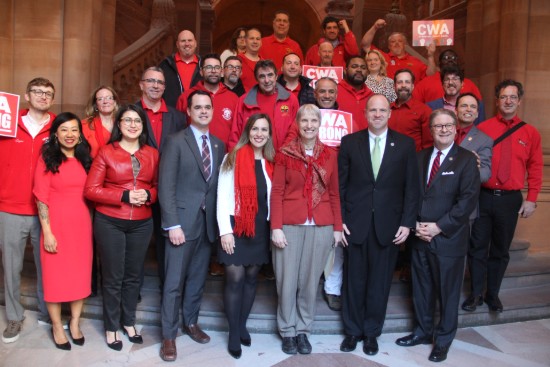 The bill will protect call center jobs in New York by ending tax breaks for companies that ship at least 30% of their workforce out of state, as well as require all state agencies to ensure that all business related call center work is performed by companies located in New York.

“Hard work doesn’t go without roadblocks, but at the end of the day we prevailed,” said Local 1104 member Philroy John, a call center worker in Garden City.  “This bill will directly affect me, my job, my family, and my ability to provide for my family, so to see that we were able to get it passed today was a huge relief."

The vote came just four days after CWA members in Syracuse held a press conference to speak out about the loss of their jobs due to an announced call center closure by AT&T.  The workers were joined by NY State Senator Rachel May, Assemblywoman Pamela Hunter, Assemblyman William Magnarelli, County Legislator Peggy Chase, the Central NY Area Labor Federation, and others to speak out about the terrible impact that closing this call center will have on workers and on the community.  They called on legislators in Albany to pass the NY State Call Center Jobs Act as soon as possible before even more workers lose their jobs. 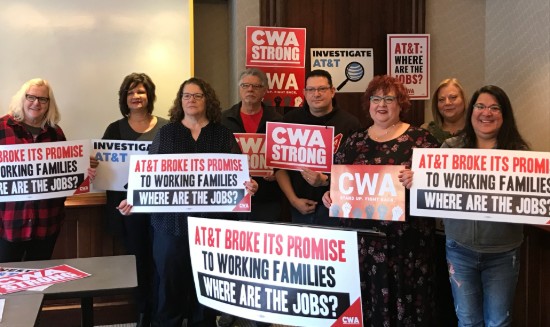 “On January 6th of this year I celebrated my 22nd anniversary with AT&T, to find out the next day that I was losing my job,” said Gina McClurkon.  “I believe the call center bill has to be passed because maybe it’s not going to help me and my brothers and sisters here, but maybe future families.”

The New York State Call Center Jobs Act still needs to be passed in the Assembly and signed into law by Governor Cuomo, but after years of fighting to get the bill through Senate committees and to the NY State Senate floor for a vote, this is a monumental step in protecting call center workers in New York. 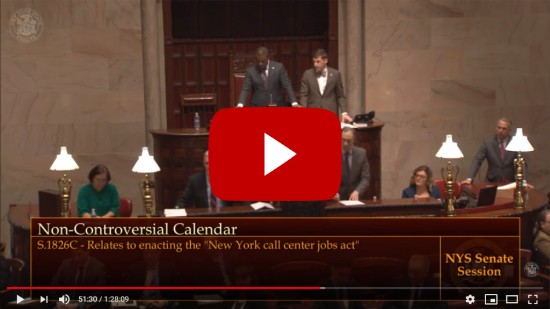 WATCH the full Senate vote here, including the many shout outs given to CWA from the Senate floor.