As the trial over the T-Mobile/Sprint merger opened on December 9th in Manhattan, CWA members and allies gathered outside the courthouse to raise their voices about the merger and show their support for the 14 state Attorneys General who filed the lawsuit to block the merger, including New York Attorney General Tish James.

CWA District 1 Vice President Dennis Trainor and T-Mobile Workers United (TU) members Mike Godshall from Wichita, KS and Mark Jenkins from Bellingham, WA thanked the Attorneys General for their commitment to protecting workers and consumers from the job loss and higher prices that could result from this merger.

Trainor noted that T-Mobile has made many promises to get the merger approved, but that the only way to enforce promises on jobs is through a collective bargaining agreement.

"With union representation in T-Mobile workplaces, CWA would be able to track any job cuts after the merger and to hold T-Mobile accountable," Trainor said. "That is why CWA has been clear that T-Mobile must commit to respecting its workers' right to organize. This would give workers at the new T-Mobile free choice to join a union, which is a necessary condition to protect good jobs at the company after the merger." 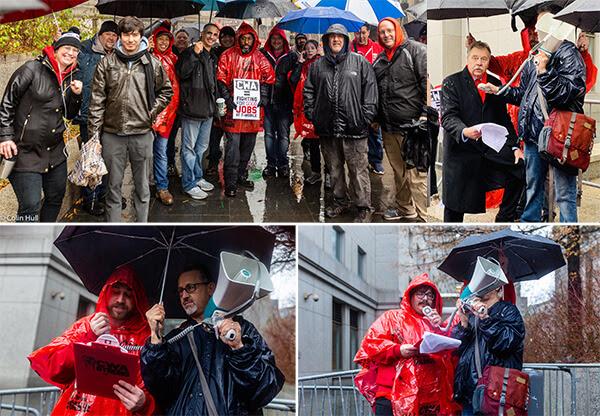 Check out video of the rally here!